A new overview of biotech crops in 2012

Fact 1.
2012 was the 17th year of successful commercialization of biotech crops.

Biotech crops were first commercialized in 1996, and planting increased every single year between 1996 to 2012 with 12 years of double digit growth rates, reflecting the confidence and trust of millions of risk-averse farmers from both developing and industrial countries around the world. 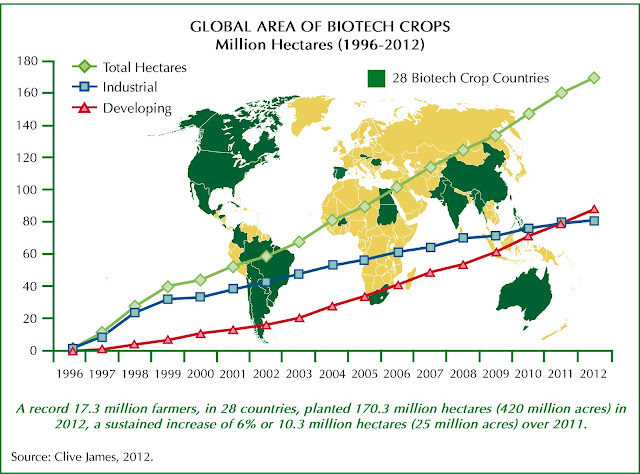 This makes biotech crops the fastest adopted crop technology in recent times. The reason – they deliver benefits. In 2012, hectarage of biotech crops grew at an annual growth rate of 6%, up 10.3 million from 160 million hectares in 2011. Millions of farmers in almost 30 countries worldwide have made more than 100 million independent decisions to plant an accumulated hectarage of almost 1.5 billion hectares, equivalent to 50% more than the total land mass of the United States or China. This growth reflects the fact that biotech crops deliver sustainable and substantial socioeconomic and environmental benefits. 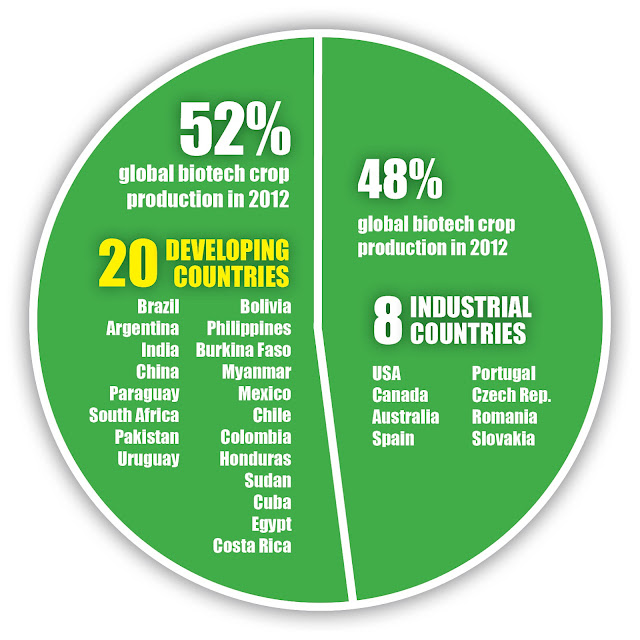 In 2012, a record 17.3 million farmers, up 0.6 million from 2011, grew biotech crops – remarkably over 90%, or over 15 million, were small resource-poor farmers in developing countries. Farmers are the masters of risk-aversion and in 2012, a record 7.2 million small farmers in China and another 7.2 million in India, elected to plant almost 15 million hectares of Bt cotton, because of the significant benefits it offers. In 2012 over one-third of a million small farmers in the Philippines benefited from biotech maize.

The continent continued to make progress with South Africa increasing its biotech area by a record 0.6 million hectares to reach 2.9 million hectares; Sudan joined South Africa, Burkina Faso and Egypt, to bring the total number of African biotech countries commercializing biotech crops to four. Five countries, Cameroon, Kenya, Malawi, Nigeria and Uganda conducted field trials of biotech crops, the penultimate step prior to approval for commercialization. The lack of appropriate, science-based and cost/time-effective regulatory systems continue to be the major constraint to adoption. Responsible, rigorous but not onerous, regulation is needed, particularly for small and poor developing countries.

From 1996 to 2011, biotech crops contributed to Food Security, Sustainability and the Environment/Climate Change by: increasing crop production valued at US$98.2 billion; providing a better environment, by saving 473 million kg a.i. of pesticides; in 2011 alone reducing CO2 emissions by 23.1 billion kg, equivalent to taking 10.2 million cars off the road for one year; conserving biodiversity by saving 108.7 million hectares of land; and helped alleviate poverty for >15.0 million small farmers and their families totaling >50 million people, who are some of the poorest people in the world. Biotech crops are essential but are not a panacea and adherence to good farming practices such as rotations and resistance management, are a must for biotech crops as they are for conventional crops.

Cautiously optimistic with more modest annual gains likely due to the already high rates of adoption in the principal biotech crops in mature markets in both developing and industrial countries.


For more information about ISAAA, the Global Status of Commercialized Biotech/GM Crops Briefs, and other information resources, visit the ISAAA website at http://www.isaaa.org/.