Since 1996, during the first year of commercialization of biotech crops, ISAAA has released the annual “Global Status of Commercialized Biotech/GM Crops”, a Brief documenting the latest information on the global status of commercially approved biotech crops. Year after year, ISAAA prepares the Brief and supports its free distribution to developing countries to provide information and knowledge to the scientific community and facilitate a more informed and transparent discussion regarding the potential role of biotech crops in contributing to global food, feed, fiber and fuel security, and a more sustainable agriculture.

The 2013 Global Status Brief is the 18th such publication in its series, and documents the global database on the adoption and distribution of biotech crops in 2013, when 18 million farmers from 27 countries worldwide planted 175.2 million hectares of biotech crops. Below are summaries of the country launches held for ISAAA's 2013 Global Status Brief.

The 2013 Global Status of Commercialized Biotech/GM Crops Brief was launched at the Chinese Academy of Agricultural Sciences (CAAS) in Beijing, China, on February 14, 2014. The launch was held during the Crop Biological Breeding Industrialization Summit 2014, an event attended by more than three hundred participants from China’s scientific and academic community, government agencies, private sector and media. The summit featured a seminar by Dr. Clive James, author of the Brief and ISAAA’s Founder/Emeritus Chair. ISAAA’s Chair Dr. Paul Teng, discussed Food Security: A Defining Issue for Asia.

In , Dr. James presented to members of the media the 2013 global status of biotech crops. Around 20 journalists from attended the media seminar, and asked Dr. James about the status and development of commercialized biotech crops in , climate change and biotech crops, and the possible solutions to public mistrust and awareness about GM crops.

Around 100 participants attended the media seminar in , , with Dr. Masahiro Suzuki of the Council for Biotechnology Information in as seminar chair.


﻿
For more information about ISAAA's Global Status of Commercialized Biotech/GM Crops: 2013, visit the website at http://www.isaaa.org/resources/publications/briefs/46/default.asp. Various information resources, including the Executive Summary, Top Ten Facts about Biotech/GM Crops in 2013, Powerpoint Slides, Infographics, and videos are all available for download from the same link.

For more information about ISAAA, visit http://www.isaaa.org/.
Posted by ISAAA at 3:51 PM No comments: 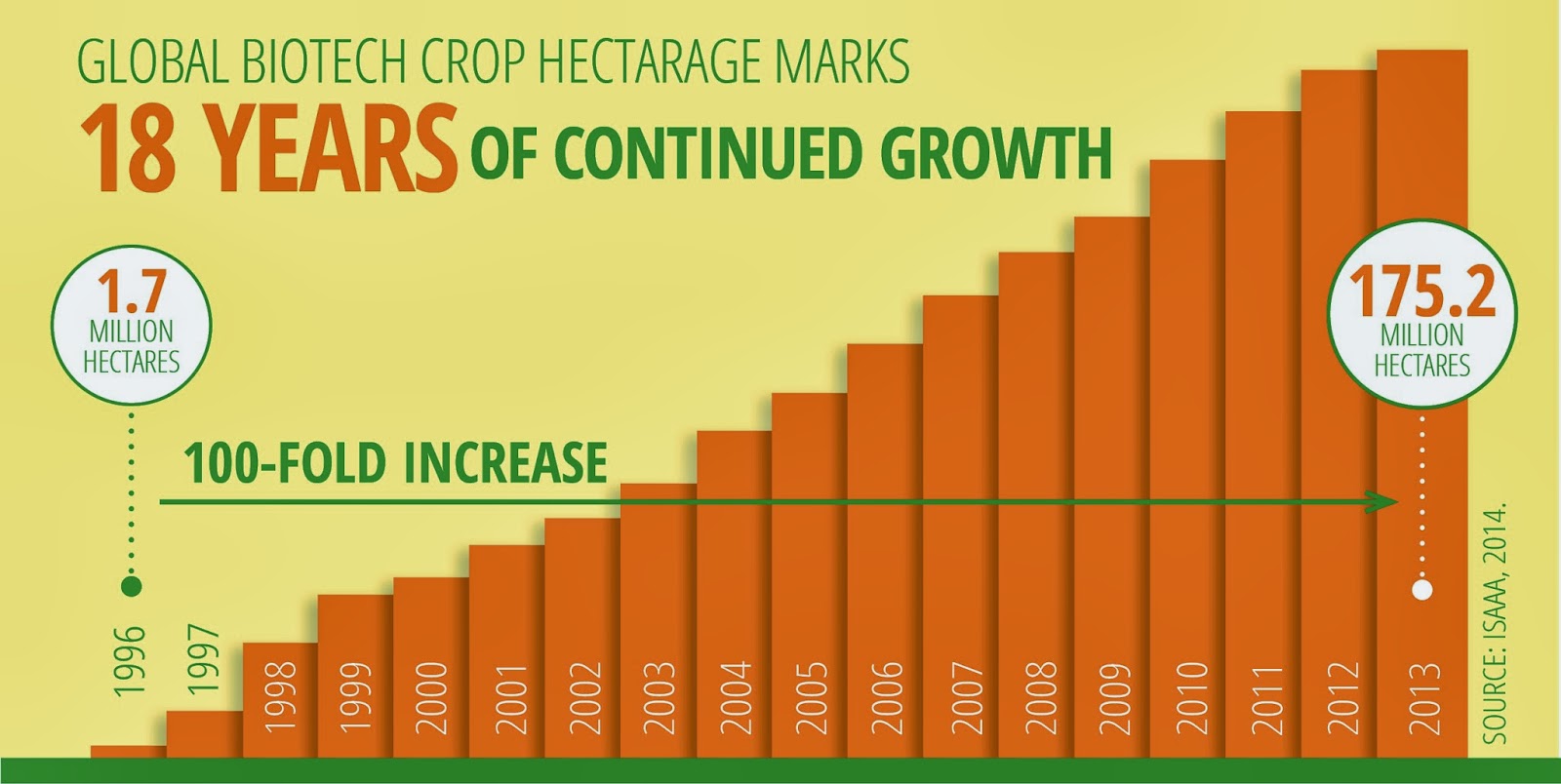 More Farmers Are Planting and Replanting Biotech Crops
From 1996 to 2013, millions of farmers in almost 30 countries worldwide, elected to make more than 100 million independent decisions to plant and replant an accumulated hectarage of more than 1.6 billion hectares. In 2013 alone, a record 18 million farmers grew biotech crops, up by 0.7 million from 2012, of which more than 90% or over 16.5 million are small, resource-poor farmers in developing countries.

In , 7.5 million small farmers benefited from biotech cotton, and in there were 7.3 million beneficiary farmers. In addition to economic gains, farmers benefited enormously from at least 50% reduction in the number of insecticide applications, reducing farmer exposure to insecticides, and importantly contributed to a more sustainable environment and better quality of life.

Farmers from Latin America, Asia, and Africa collectively grew 94 million hectares or 54% of the global 175 million biotech hectares (versus 52% in 2012), compared with industrial countries at 81 million hectares or 46% (versus 48% in 2012), almost doubling the hectare gap from 7 to almost 14 million hectares between 2012 to 2013, respectively. This trend is expected to continue, and is contrary to the prediction of critics who, prior to the commercialization of the technology in 1996, prematurely declared that biotech crops were only for industrial countries and would never be accepted and adopted by developing countries, particularly small poor farmers.

The USA is Still the World’s Lead Producer of Biotech Crops
The continued its leadership in producing biotech crops in 2013 with 70.1 million hectares, an average adoption rate of ~90% across all biotech crops. Since 2006, the has planted eight biotech crops, namely: maize, soybean, cotton, canola, sugar beet, alfalfa, papaya, and squash.

Continues To Be The Engine Of Biotech Crop Growth Globally
ranks only second to the in biotech crop hectarage in the world with 40.3 million hectares, but emerging as a strong global leader in biotech crop production. For the fifth consecutive year, increased biotech crop plantings more than any other country in the world.

Progress in
In Africa, continued progress has been made with and increasing their Bt cotton hectarage substantially. In 2013, ’s biotech hectarage was marginally less, but practically at the same level as 2012. Encouragingly an additional seven African countries (Cameroon, Egypt, Ghana, Kenya, Malawi, Nigeria and Uganda) have conducted field trials on a broad range of “new” biotech crops (cotton, maize, bananas, and cowpeas), including several orphan crops such as sweet potato.

Contribution of Biotech Crops to Food Security, Sustainability and Climate Change
From 1996 to 2013, biotech crops contributed to Food Security, Sustainability and Climate Change by:
·         increasing crop production valued at US$116.9 billion;
·         providing a better environment, by saving 497 million kg a.i. of pesticides; in 2012 alone reducing CO2 emissions by 26.7 billion kg, equivalent to taking 11.8 million cars off the road for one year;
·         conserving biodiversity in the period 1996-2012 by saving 123 million hectares of land; and
·         helped alleviate poverty by helping >16.5 million small farmers, and their families totaling >65 million people, who are some of the poorest people in the world.

Future Prospects
The near-term looks optimistic with more modest annual gains expected due to the already high rates of adoption (90% or more) in the principal biotech crops in mature markets in both developing and industrial countries. , and approved biotech crop planting in 2013 with plans for commercialization in 2014.

For more information about ISAAA, visit the website at http://www.isaaa.org/.

The Global Status of Commercialized Biotech/GM Crops: 2013 information resources, including the Executive Summary, Top Ten Facts about Biotech/GM Crops in 2013, Powerpoint Slides, Infographics, and videos are all available for download at: http://www.isaaa.org/resources/publications/briefs/46/default.asp.
Posted by ISAAA at 1:34 PM No comments: