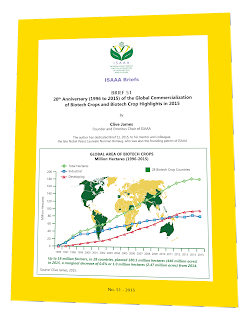 ISAAA has released the 20 Brief in its global status of commercialized biotech/GM crops in on April 13, 2016. Brief 51, 20 Anniversary (1996 to 2015) of the Global Commercialization of Biotech Crops and Biotech Crops Highlights in 2015, authored by ISAAA Founder and Emeritus Chair, Clive James.

Brief 51 companion documents include the Executive Summary, Top Ten Facts about Biotech Crops and a volume of Invitational Essays (Progress and Promise), which are designed to celebrate the 20 Anniversary of the commercialization of biotech crops during the twenty-year period, 1996 to 2015 as well as the 2015 highlights.

Year after year, ISAAA prepares the global status report and supports its free distribution to developing countries to provide information and knowledge to the scientific community and facilitate a more informed and transparent discussion regarding the potential role of biotech crops in contributing to global food, feed, fiber, and fuel security, and a more sustainable agriculture.

Brief 51 was launched the ISAAA Press Conference in China World Hotel Beijing on April 13, 2016, attended by 30 representatives of major media outlets (print, online, and TV broadcast). Dr. Paul S. , ISAAA Chair, presented the Highlights of the Report prepared by Dr. James. ISAAA Global Coordinator Dr. Randy A. discussed the Overview of Biotech Crops in Asia with emphasis on biotech crop planting and regulatory milestones in , , , , , , , and , which has commercialized biotech maize for the first time in 2015.

Mr. Hernan Viola, the Agro-Industrial Attaché of the Embassy of Argentina in , presented an overview of biotech crops and the benefits they generated in . Dr. Zhang Chun-Yi, Deputy Director General of the Biotechnology Research Institute, CAAS and Prof. Huang, patron of ISAAA, gave the opening and closing remarks, respectively.

A seminar was conducted on April 14 at the Library of the of (CAS) where Dr. Gao Caixia of the and Biology, CAS, made a timely presentation on Genome Editing: Progress and Perspectives.  Mr. Mark Petry of the USDA FAS gave a presentation on Reconsideration of New Breeding Technology and Biotech Regulation in the US. Some 150 members of the , government regulators, industry, media, students and researchers attended the seminar which was co-organized by CAAS, the of Agricultural Sciences, and the ISAAA China BIC.

Brief 51 wented at a media seminar held at the Sofitel Plaza Hotel in on April 15. The seminar was co-organized by the Agricultural Genetics Institute (AGI) led by Dr. Le Huy Ham. Drs. and by Dr. Mahaletchumy Arujanan, executive director of the Malaysian Biotechnology Information Center (MABIC), who presented the Overview of New Breeding Technologies and Current Status. Around 100 attendees composed of researchers, policy makers, regulators, industry representatives, and media practitioners attended the event, and received copies of Brief 51 materials that were distributed during the seminar.

The seminar in was held in the Ministry of Agriculture on April 19. Dr. presented the Highlights of Brief 51, and also made a presentation on new breeding technologies. Mr. Bhagirath Choudhary, director of the based in presented the Overview of Biotech Crop Adoption in .

The event was co-organized by ISAAA and IndoBIC, with around 100 members of the , media practitioners, and policy makers, including regulators and industry representatives in attendance. Copies of Brief 51 materials were distributed at the close of the seminar.

The ISAAA AfriCenter in collaboration with (AFSTA) and the Association Nationale des Entreprises Semencières Burkina Faso (ANES-BF), a local seed trade association, launched the Brief 51 in on April 20, 2016. The event was attended by 40 participants that included seed traders, media representatives, government regulators, and scientists. Hon. Henri Koubizara, a member of the parliamentary commission on economic development, environment and climate change was the guest of honor. Dr. Margaret Karembu presented the ISAAA report highlighting the role of seed traders in the adoption and commercialization of GM crops. Local scientists and regulators shared the status of GM crop research and regulation in , and the region at large.

In Bangladesh, the Honorable Minister of Agriculture Matia Chowdhury inaugurated the seminar on 20 Anniversary of the Global Commercialization of Biotech Crops and Biotech Crop Highlights in 2015 at the Bangladesh Agricultural Research Council (BARC) in Dhaka, Bangladesh on May 12.

Resource persons in the seminar included Drs. and Arujanan, and Mr. Choudhary. Dr. G.P. Das facilitated the seminar which was attended by agriculture officials and members of the scientific community in .  During the seminar, Minister Chowdhury emphasized the need for scientific innovations  collaborations to improve food production and poverty alleviation in . She also stated that the government is pro-active in adopting biotech innovations for introducing improved varieties to their farmers. The seminar was jointly organized by , BARC, and ISAAA.

More information about ISAAA Brief 51 20th Anniversary (1996 to 2015) of the Global Commercialization of Biotech Crops and Biotech Crops Highlights in 2015 are available at the ISAAA website: http://www.isaaa.org/resources/publications/briefs/51/default.asp.

Brief 51 companion documents available for download from the same link.