5 Questions with Jennifer Thomson, Microbiologist, President of the Organization for Women in Science for the Developing World, and The World Academy of Science Fellow 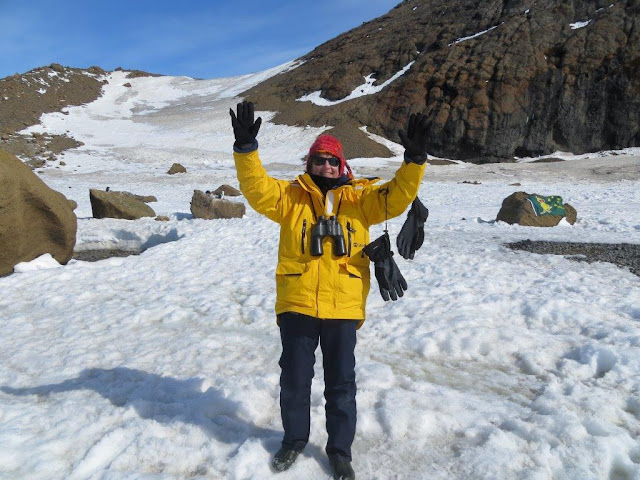 Science, for the longest time, has been a male-dominated business, but studies report that women are starting to catch up. The number of women who are working in science-related fields has grown steadily in the last two decades. One of these strong women is Dr. Jennifer Thomson from South Africa’s University of Cape Town. Jennifer is one of the many successful women whose work has been celebrated around the globe. She is one of the 16 women and 10 African scientists who were elected as fellows to The World Academy of Science (TWAS) in January 2018.

Jennifer has been a strong advocate of promoting modern biotechnology in Africa for its potential in helping the continent overcome hunger and poverty. The first woman to head a department in the Science Faculty at the University of Cape Town, she has written a number of peer-reviewed papers and authored books about genetically modified (GM) crops. Jennifer is also a well-known speaker about GM crops and has addressed the World Economic Forum in Davos twice and the United Nations as guest of then Secretary General Kofi Annan. Her three books, Genes for Africa, Seeds for the Future, and Food for Africa are bestsellers and written with the layperson in mind.

During her election as President of the Organization for Women in Science for the Developing World (OWSD) in 2016, Jennifer referred to her new role as an extension of her lifelong passion for promoting women in science. But how did Jennifer become one of South Africa’s staunchest supporter of modern biotechnology? In this new series, we asked Jennifer five questions to get a glimpse of her advocacy.

Growing up, who was your inspiration/idol?

My inspiration was my Aunt Margaret, who was the youngest woman headmistress of a high school in South Africa. As a family, we never made any major academic decisions without first consulting her. She also knew the names and family details of all her pupils, past and present.

Why did you want to be a microbiologist?


I didn’t – it happened by a series of coincidences. In fact, as a zoology undergraduate I pitied microbiology majors as they seemed to spend all their time looking down microscopes, which I didn’t want to do. But when I went to Cambridge after my BSc, the zoology department was very old fashioned, so I asked the head of the genetics department if I could switch (on the basis of 1 week’s lectures in genetics). He agreed, but they worked on organisms that grew too slowly so I decided I’d better do my PhD on organisms that grew quickly. Hence I switched to bacterial genetics – and I still don’t know how to use a microscope! 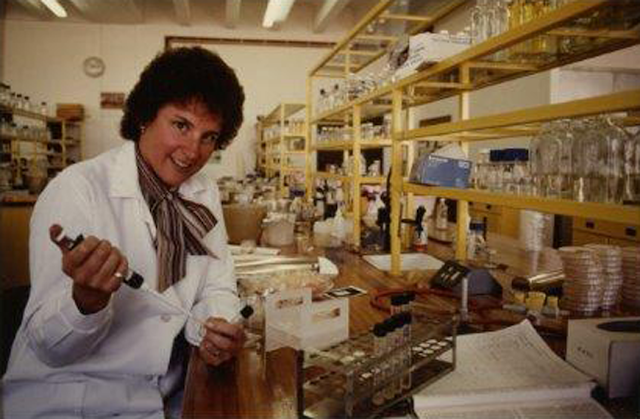 How did you rise up to the greatest challenge that your job has presented to you?

My greatest challenge was being the first woman head of a department in the Science Faculty at the University of Cape Town. I was interviewed by a panel of white males (it was in 1988), many of whom didn’t want me. I showed them that I could run a department better than most of them, because, instead of the headship being rotated every 3 years, my department voted me in for 12 years.


As one of the major influencers in Africa, how are you unique from the others? 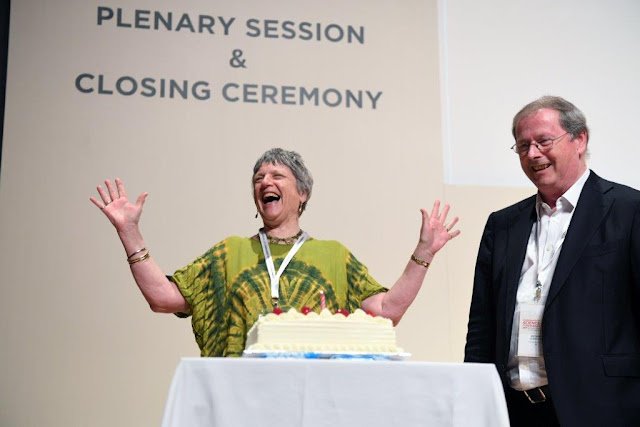 I am certainly not unique! I think one of the reasons I have been successful is that, early in my career, I decided not to have children. I don’t want any other woman in Africa to have to make that choice – hence my present position as President of the Organization for Women in Science for the Developing World (OWSD).

What is your vision for Africa's agricultural productivity?

The use of every modern tool that can improve both productivity and nutrient value. If that involves genetically modified crops, indigenous knowledge, artificial intelligence, better use of grey water – no matter – go for what works best. But make sure that technology serves the people, not the other way round.


About Jennifer Thomson (from the University of Cape Town’s website):
Jennifer Thomson has a BSc in Zoology from the University of Cape Town (UCT), an MA in Genetics from Cambridge University and a PhD in Microbiology from Rhodes University in South Africa. She was a post-doctoral fellow at Harvard Medical School. She was a lecturer, senior lecturer and Associate Professor in the Department of Genetics at the University of the Witwatersrand in South Africa before starting and being the Director of the Laboratory for Molecular and Cell Biology for the Council for Scientific and Industrial Research. She then became Professor and Head of the Department of Microbiology at UCT, a post she held for 12 years until the Department merged with the Department of Biochemistry. She is now an Emeritus Professor of Microbiology in the Department of Molecular and Cell Biology at UCT. Her main current research interests are in the development of maize resistant to the African endemic maize streak virus and tolerant to drought. Other positions held include the Deputy Dean of Science at UCT, a former chair and member of the South African Genetic Engineering Committee, co-founder of SA Women in Science and Engineering, Fellow of the Royal Society of South Africa and former Vice-President of the SA Academy of Science. She is a former Chair of the African Agricultural Technology Foundation (AATF) and Vice-Chair of the board of the International Service for the Acquisition of Agribiotech Applications (ISAAA). She is President of the Organization for Women in Science for the Developing World (OWSD), a member of the Independent Science and Partnership Council (ISPC) of the CGIAR and a member of the National Advisory Council on Innovation (NACI) to the Minister of Science and Technology in South Africa.

For more about Jennifer’s research work, visit the University of Cape Town website.


5 Questions With… is a continuing series in the ISAAA Blog. A new personality will be featured every quarter, so watch out for our next feature!

The International Service for the Acquisition of Agri-biotech Applications (ISAAA) and its network of Biotechnology Information Centers launched a new campaign on social media which aims to empower women in science. The campaign called Science and She, features scientists and science communicators who tell their stories and aspirations for science and the society with the hope that the stories will help bridge the gap between science and the public.

For each week, one female scientist or science communicator serves as the curator of the Science and She social media pages. The first curator for the campaign is Dr. Rhodora Romero-Aldemita, Director of ISAAA Global Knowledge Center on Crop Biotechnology. Dr. Aldemita is a crop scientist with knowledge and experience accumulated over the years on agriculture-related topics such as plant pathology, plant physiology, molecular biology, and rice biochemistry. Currently, she is involved in sharing her knowledge with the public so they can have fact-based decisions regarding GM crops.

Dr. Aldemita did not expect to be a scientist, let alone one who would be recognized by the National Academy of Science and and other prestigious award-giving bodies such as the Outstanding Women in the Nation’s Service Foundation and The World Academy of Science. Her inherent love for her family and desire to improve their living conditions motivated her to study and work hard. 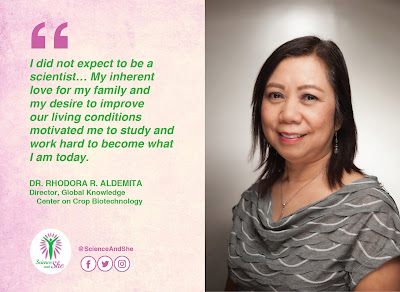 “In order to succeed in our field, we have to realize our potentials and limitations. We need to explore and develop these potentials and use them wisely and to the fullest. I developed my abilities through studying, training, conducting research, and publishing. Although the outputs of my rice genetic engineering work were not immediately available to help consumers and farmers at that time, I knew that they would make difference in the future, and they did!! Most importantly, we have to overcome our limitations by being resourceful and by exploring alternatives,” Dr. Aldemita says. 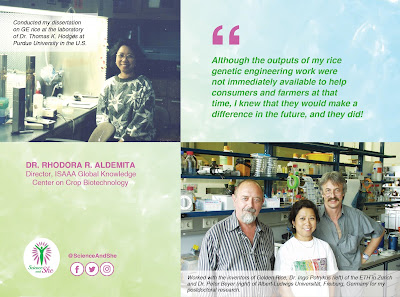 One of her biggest achievements was being awarded as one of the Ten Outstanding Women in the Nations Service for Excellence in the field of Science in 1998. It was the culmination that reaffirmed all the awards she has received including the Ten Outstanding Young Scientist in the Philippines, the Science Prize in Biology by the National Academy of Science and Technology, Philippines, and The World Academy of Sciences, Italy, and many other recognitions. The latest award was the recognition of her home city, , as an Outstanding San Pableño in the field of Agriculture. Each time she was introduced as a multi-awarded scientist, her credibility as biotech expert and spokesperson was validated. 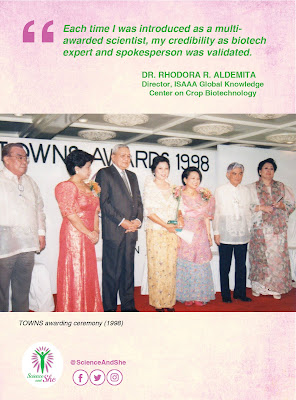 “As a scientist, I was able to develop a rice transformation technology that is still being used by researchers today. As a science communicator, I am honored to help others gain knowledge and understanding about a technology that is highly beneficial to many. I have worked for years in the lab, and I am confident that biotechnology is used by scientists like me to help improve lives. Scientists work hard for their own families, as well as to help other families have bountiful harvest and food on their plates. By communicating about the benefits of biotechnology, I am hopeful that time will come when more people will appreciate the technology and acknowledge its importance. This will lead to more countries planting biotech crops, and more mouths being fed. When that time comes, all my hard work, together with the efforts of other scientists, will be worth it,” she says. 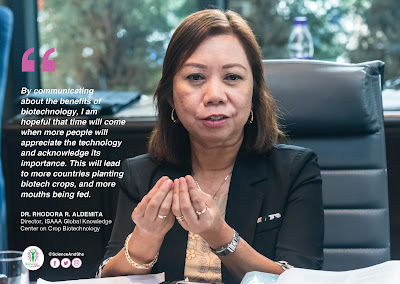