Science and She: Dr. Margaret Karembu

Science and She is an online campaign of the International Service for the Acquisition of Agri-biotech Applications (ISAAA) and its network of Biotechnology Information Centers which aims to empower women in science. Scientists and science communicators tell their stories and aspirations for science and the society with the hope that the stories will help bridge the gap between science and the public. 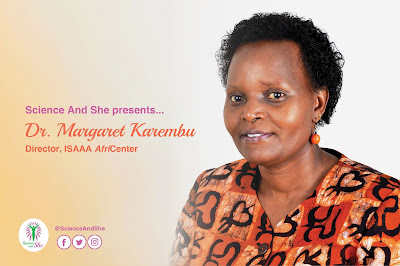 For each week, one female scientist or science communicator serves as the curator of the Science and She social media pages on Facebook, Twitter, and Instagram. One of the previous curators of the pages was Dr. Margaret Karembu, Director of ISAAA AfriCenter based in Nairobi, Kenya. She oversees the Africa-based Biotechnology Information Centers in East and Central Africa (Kenya), Francophone Africa (Mali/Burkina Faso), and Egypt. She also serves as the chair of the Open Forum on Agricultural Biotechnology (OFAB) Programming Committee, Kenya Chapter. Dr. Karembu holds a PhD in Environmental Science Education from Kenyatta University and has over 10 years of experience in university teaching.

Dr. Karembu’s passion for science started very early in life. Having grown and lived in rural Africa most of her childhood, direct interaction with nature would start early in the morning until dusk. “The roadside grass dew provided easy wipes to our weary feet after trekking several kilometers to school barefoot. Evening routine entailed fetching firewood from nearby bushes and drawing water from a local stream on the Slopes of Mt Kenya. I would smell every flower and berry I came across though some were not that pleasant! I had no idea that this was preparing me for a quantum leap from the village to the world,” Dr. Karembu narrates. 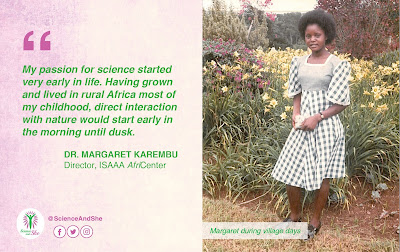 Dr. Karembu has been known to be passionate about science and a strong believer in the power of innovations for transforming African agriculture into efficient, competitive and profitable enterprises for women, youth and small-holder families. She demonstrates this through various communication initiatives. She used to work as a science teacher at the premier Kenya Science Teachers College, a significant experience that trained her to simplify science jargon for the public. Her engagements at ISAAA also contributed to building her confidence and nurturing her skills in science communication and thus realizing her goal in life – making science better appreciated.

By virtue of gender roles, Dr. Karembu believes that every woman is a scientist in her own right whether at professional or community level. Women are key in decision-making about food, clothing and sustaining the health of their families, and can be trusted with passing scientific information about these issues. Empowering women with skills to communicate science is thus crucial, just as it is investing in women for science. This conviction to empower women led Dr. Karembu to initiate putting up a network that aims to play a significant role in strengthening the capacity of African women to engage in biosciences and policy dialogue for sustainable livelihoods. Thus in May 2018, the African Women for Bioscience (AWfB) platform was launched. 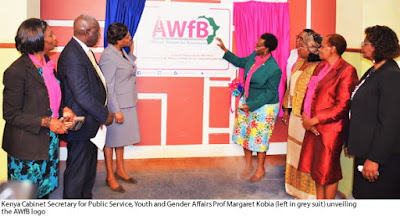 For Dr. Karembu, being appointed by Kenya’s President to serve as Council Chair and Vice-chair of Cooperative University and the Meru University College of Science and Technology, respectively, were her most significant achievements. While serving in these positions, she realized how big the gap is between researchers and the society. She constantly emphasizes that effective science communication is also very important in strengthening institutional leadership. Thus, she recommends the establishment of a department or unit in every university to improve science communication. 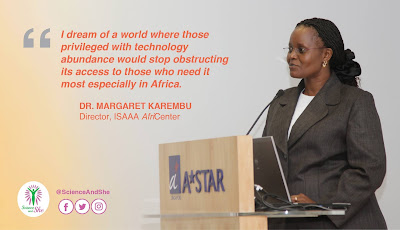 “I dream of a world where those privileged with technology abundance would stop obstructing its access to those who need it most especially in Africa. A time when the naysayers would stop demonizing biotechnology and tagging those who struggle to explain. Rather, a world where people accommodate each other’s opinions and choice. I picked these victuals from Kenyatta University in Kenya where I attained all my degrees from - from undergraduate, masters to PhD. My father always encouraged us to respect the lesser and the mightier and this has helped me a lot in achieving my life’s dream,” Dr. Karembu shares.

In a video, Dr. Karembu narrates the story of millions of African women struggling daily to bring food on the table and how African researchers are working hard to also deliver products of biotechnology. “I am very proud to be helping them improve on how they deliver their messages about their research reaching out to policymakers so that we can have enabling policies that will bring technologies that will be useful for African women,” she said. Watch the entire video on Science and She's Facebook Page.
Posted by ISAAA at 12:24 PM