Science and She is an online campaign of the International Service for the Acquisition of Agri-biotech Applications (ISAAA) and its network of Biotechnology Information Centers which aims to empower women in science. Scientists and science communicators tell their stories and aspirations for science and society with the hope that the stories will help bridge the gap between science and the public. 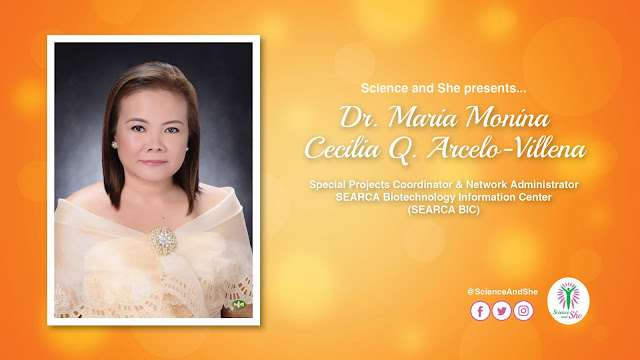 For one week, a female scientist or science communicator serves as the curator of the Science and She social media pages on Facebook, Twitter, and Instagram. One of the previous curators was Dr. Maria Monina Cecilia Q. Arcelo-Villena, former Special Projects Coordinator & Network Administrator of the Southeast Asian Regional Center for Graduate Study and Research in Agriculture Biotechnology Information Center or SEARCA BIC (February 2014 to June 2018). While still working on the objectives of the BIC, Dr. Villena eventually took a bigger role as head of SEARCA's Knowledge Management Department. As Head, she leads the implementation of KMD's projects geared towards the promotion of a learning culture, knowledge creation, and knowledge sharing and use among key actors in agricultural and rural development in Southeast Asia.

“Destiny is not by chance. It is a choice. I chose to study communication because I want to tell stories and influence people. Communicating science enables me to change the existing narrative and touch people's lives,” Dr. Villena shares. 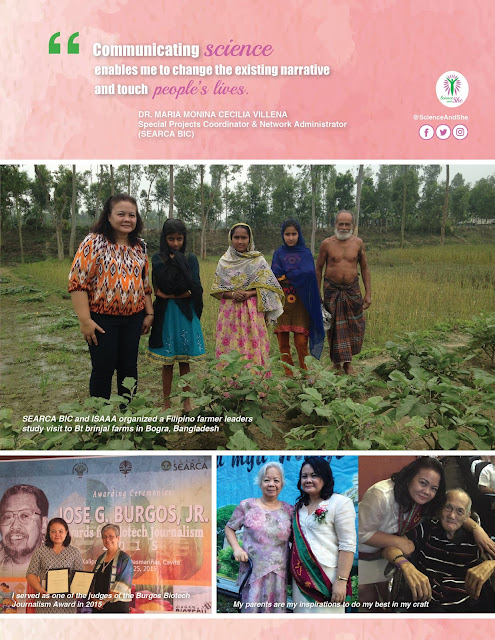 She has 26 years of work experience in editorial and market research from the private sector and specializes in public relations, public advocacy, and knowledge management. She’s also an expert in the fields of science communication (biotechnology, climate change, and food security and nutrition), message framing, message priming, and information and communications technology. She said that science communication is difficult when done in an environment where there is a low appreciation for science. But when people begin to listen that's when all efforts are made worthwhile.

Dr. Villena's work on biotech communication began at ISAAA as a Communication Specialist when she joined the team of Dr. Mariechel Navarro and Dr. Napoleon Juanillo who conducted stakeholder perception studies on understanding and attitude towards biotechnology in five countries in Southeast Asia. Later on, Dr. Villena joined Dr. Navarro as one of the science writers for the Crop Biotech Update.

From 2004 to 2012, she held several positions in the private sector, particularly at Global Sources (Ediserve Advertising & Exhibitions). Global Sources is one of the leading business-to-business media companies worldwide and primarily facilitates trade with Greater China. As a senior member of the editorial department, Dr. Villena developed and implemented editorial strategies that facilitated global trade through multimedia platforms.

The call for science communication came in again in March 2014 when Dr. Villena started to lead the SEARCA BIC. Through her leadership, the BIC has penetrated the legislative and judicial branches of government and initiated engagements with key personalities to bring forward the biotech dialogue in the country. The BIC was also able to reach out to farmers, consumers, and other key stakeholders to inform them through public briefings on the new biotech and biosafety regulations in the Philippines. This was mainly through Dr. Villena’s initiative, with the hope to lead the Filipinos to make informed choices involving biotechnology. Dr. Villena also led the introduction of biotech in social media with SEARCA BIC's Know The Science project. Know The Science uses multi-platform campaigns to educate the Filipino public about biotech crops and technology by understanding the science behind them. Through this project, Dr. Villena promoted the creation of biotech champions from different stakeholders. 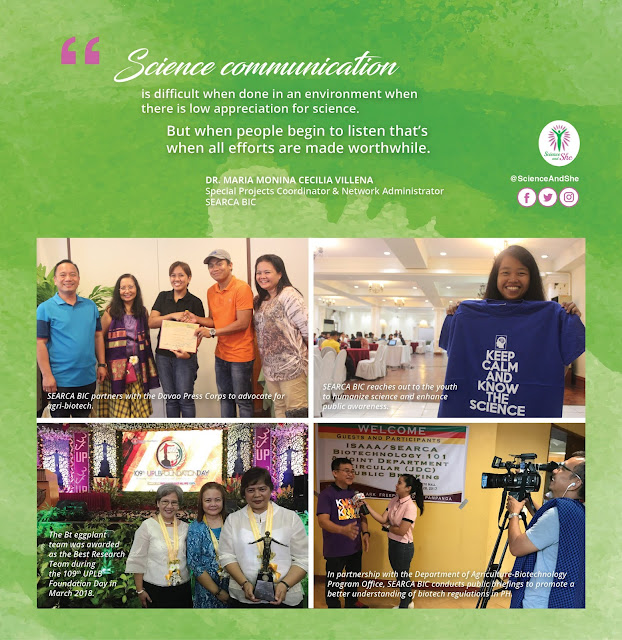 On June 29, 2019, Dr. Villena passed away at the age of 48, but her contributions to science communication live on, inspiring more women in science to press on to make science and communication a powerful combination towards the upliftment of lives and sustainable national development.